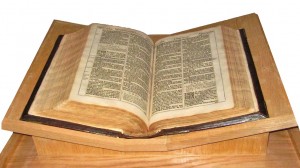 In 1603, King James, nephew of Queen Elizabeth, ascended to the English throne. Within a year he had acceded to the request of Oxford’s Corpus Christi College’s seventh President, John Rainolds, that a new English translation of the Bible be made. Almost fifty scholars worked on the project over the next seven years, and the King James Bible came to be. The first printings were made in 1611. Sixteen inches tall, these pulpit folios were designed for use in the pulpit and sold for around 55 shillings. There were a number of notable errors in this printing. In the book of Ruth, a “she” was printed as “he”, and in Matthew, in one place “Judas” was printed instead of “Jesus”. There was a second version printed in 1612 in a different format. 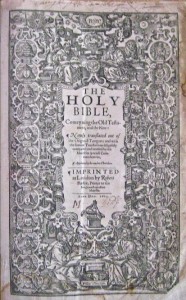 For unknown reasons, one speculation is a fire destroyed copies of the Old Testament prior to final binding; a second edition of the first printing was made. The Ruth passage was corrected in this edition. The Old Testament frontpiece is dated 1613, while the New Testament, with no corrections and dated 1611, is identical to the first edition. It is from this edition that our “Dort” Bible comes. There are two handwritten notations on the Old Testament frontpiece. One at the top of the page suggests that someone bought the Bible in 1681, now 68 years old, for 25 shillings. Further down the page is the signature, M. Giles. 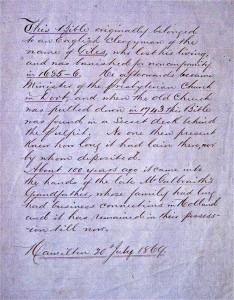 A letter placed in the Bible suggests that this M. Giles was a minister, who lost his position in the Church in England for non-conformity and moved to the town of Dort in Holland, taking the Bible with him in 1686. A quick history refresher – Oliver Cromwell overthrew the monarchy in 1649. His son Richard succeeded him in 1658. In 1660, Charles II restored both the monarchy and the Catholic Church. James II, who reigned from 1685 to 1688, after which Protestantism, i.e. the Anglican Church, was restored under King William II, invited by the parliament of the time to overthrow James, followed him. It is conceivable that Anglican clergy would leave because of the oppression of the protestant church by James during this time. Back to Rev. Giles and the town of Dort, Holland. Dort is known in church history for a significant synod held by the Catholic Church in 1618. In 1623, a Scottish Presbyterian church was founded in Dort. The minister was a Mr. Oswald and one of his deacons is a Giles Langley. In 1656, an Anglican church, the English Court Church, was set up, but was only in operation until 1700. During its time it had only three clergy, a Thomas Marshall from 1656 to 1672, followed by a Philip Bowie until 1688, and finally a Rev Whittle. After Bowie’s time, the congregation joined with the Scottish church in Dort, which operated until 1818. No mention is made in any records of a M. Giles. 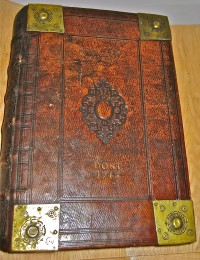 So we have a story of how the Bible gets to Dort, but no historical confirmation of any of the facts. We are also told that the Bible gets “discovered” in a desk behind the pulpit when the English Court Church is being torn down in 1743. Presumably at this time it was embossed and may have been re-bound. Hence the words, “English Church      Dort  1743” – found on the cover. To complicate matters, around 1800, a Dutch version of the Bible was printed in the town of Dort. Bible collectors refer to it as the Dort Bible, but it has no connection other than the name, to this King James Bible, referred to as the Dort Bible because the town’s name is embossed on the cover. About 25 years later Mr. Galbraith’s grandfather who had business interests in Dort acquired the Bible. While the actual relationship with Mr. Galbraith is never stated, it is believed George Forster was his grandson and brought the Bible with him from Carlisle, England, to Hamilton, Ontario, where he married Jane Young. 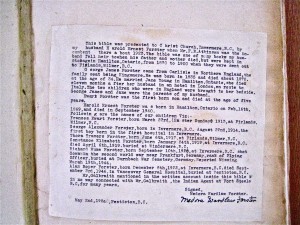 Harold Ernest Forster was born in 1869 and inherited the Bible, along with a fair bit of wealth, when his parents died in 1871. His youth was split between his father’s brothers in Carlisle and his mother’s parents in Hamilton. An adventurous man, Harold moved to BC around 1890 and in 1898 foreclosed on a 6000 acre ranch just north of Wilmer. In 1900, he had his father’s books and other items shipped out from Hamilton. Included in this collection was the “Dort Bible” which had been in the family now for 135 years. In 1912, he married Medora Hume and by 1920 had four surviving children. In 1923, Mr. Forster gave his 312-year-old Bible to the newly formed Christ Church under the Reverend Atkinson. To finish Mr. Forster’s story, his wife and children moved away from the ranch around 1930 and in 1940 Mr. Forster was murdered in his home and the house was burned to the ground. Back to our Bible: In 1929, Winn Weir, a new teacher and new to the town, started attending the church, saw the Bible and, recognizing it as something special, suggested to the Reverend Atkinson that a display case should be made for it, where it rested for the next thirty years. 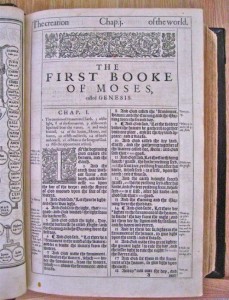 In 1960, George Curtis, a UBC Law Professor and visitor to the valley, was travelling through and stopped in to look at Christ Church and saw the Bible on the lectern. After his return to Vancouver, Mr. Curtis contacted the Reverend Desmond Kimmett, to suggest that to properly preserve the Bible, it needed to be in climate controlled conditions. Such conditions were beyond the capability of the parish and so it was arranged for the Bible to be given on loan to the Vancouver Public Library where it was put into their rare book collection. Almost thirty years later, in late 1989, George Curtis, now retired, was wondering what had ever happened to the old Bible he saw in 1960, and he wrote the Reverend Dean Houghton to inquire about it. The Reverend Houghton, unaware that the parish owned such a treasure, investigated. He eventually tracked down the Reverend Kimmett in Ottawa to find out where the Bible had been placed. In due course, the Vancouver Public Library was contacted and arrangements were made to have the Bible returned to Invermere. During the 1980’s, the local museum had constructed climate controlled storage facilities for their own collection and was willing to store the Bible for Christ Church. Before leaving Vancouver, the Bible was assessed at a value of $4,500. 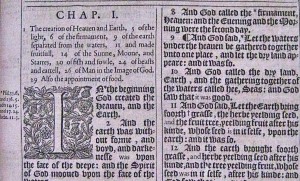 Two weeks following its return, the Bible was used at the Pentecost service then moved into storage where it remained, unseen and untouched, for the most part. In 1998, when the two congregations, Trinity United and Christ Church, were formally combined, the Bible was listed as an asset of Christ Church. From this, an intermittent discussion commenced as to it’s value, how well it was being preserved, and what should be down with it to both preserve it and also make use of it. The bible has recently been valued at $40,000. This discussion culminated in a series of congregational meetings through the fall of 2001 to discuss the future of the Bible, with two basic options being considered: To sell the Bible and use the monies for outreach, or to have the Bible restored and put it on display. As part of this discussion, Winn Weir wrote an article about the history of the Bible for the Valley Echo. The national media picked up this article and for a few brief days in early 2002 Christ Church Trinity was in the national news, both print, television and radio. 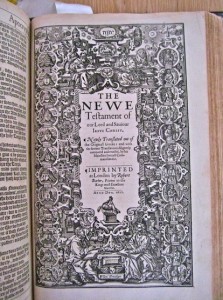 Due, in no small part to Winn’s efforts, when the congregation voted in favour of keeping the Bible, funds were quickly raised to finance the restoration. Not only did members of the congregation contribute, but donors also included children of both Harold Forster and George Curtis. It took some time to locate a qualified person to do the restoration work, and even longer for them to fit the project into their work schedule. However during the winter of 2003, Courtland Benson, from Victoria, did the restoration work. On its way home from Victoria the Bible was put on display at Regent College in Vancouver as part of an exhibition entitled Translations of the Word. 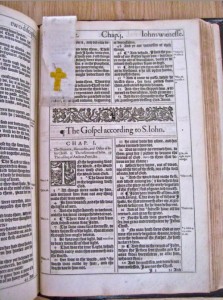 With the Bible’s return in June of 2003 work began to have an appropriate display case made. On the advice of the conservationist, Courtland Benson, it was decided that a climate-controlled case was not needed. After several attempts at getting the case made fell through, in the summer of 2004 a member of the congregation, Art Keith, volunteered to make it.

On Sunday February 20, 2005, at the Annual General Meeting of the Windermere Valley Shared Ministry, just past the first anniversary of her death, the display case for the Dort Bible was dedicated to the memory of Winn Weir. 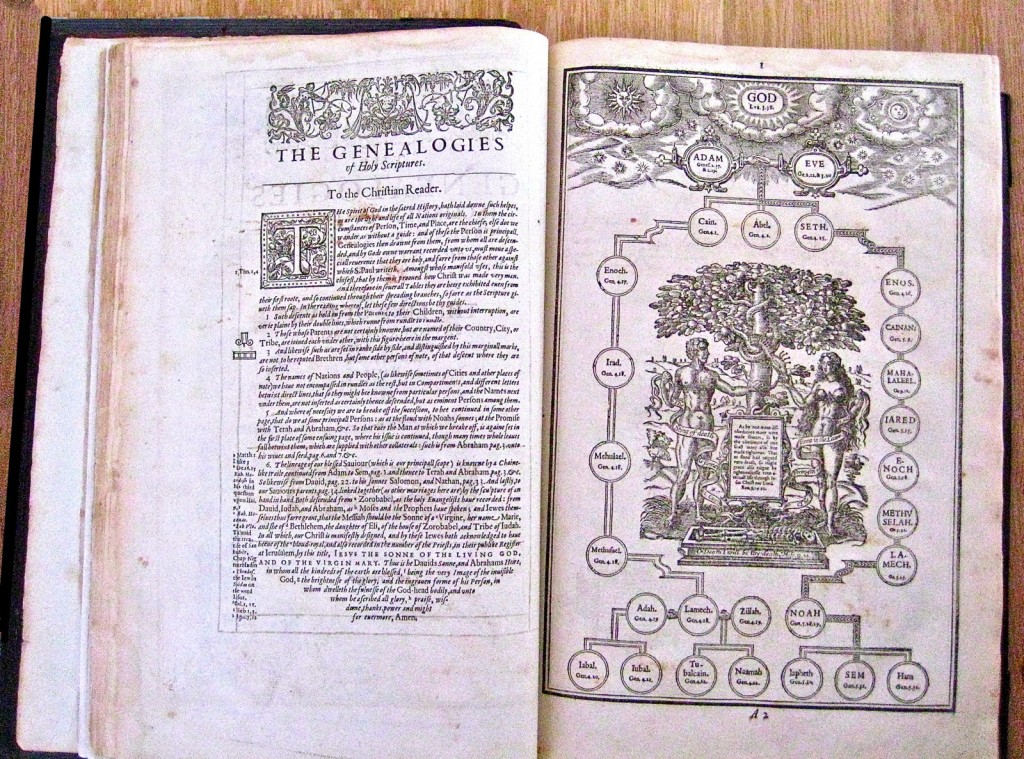