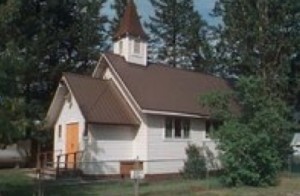 Built in 1931, Edgewater’s All Saints’ Church has been a shared ministry since its inception. 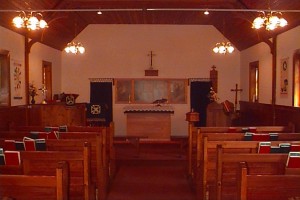 The church was planned as a joint project intended to serve Lutherans, Anglicans, and United Church members. Columbia Valley Ranches had donated the land. Support was gathered from a variety of sources:  local Anglicans contributed a thousand dollars, the United congregation loaned a thousand dollars, Bishop Doull was able to secure four hundred dollars in grants, and the Women’s Auxiliary raised the remainder of funds that were needed.  The Edgewater Sawmill donated lumber for the framing of the church.

Master carpenter Elof Madsen drew up plans and began construction, assisted by Louis Ploughman. For the interior of the church, Elof built the pews, the pulpit, and the christening font using kiln dried wood from Canal Flats.

On Sunday, September 17, 1931, over a hundred people from all over the Columbia Valley attended the opening service. Bishop Doull from Vernon led the service, and he was assisted by Reverend F. Stanford.  The celebration was followed by a lunch at the Edgewater Community Hall.  By May 1933, the church was completely finished and free of debt, and the Bishop returned for a special consecration ceremony on May 14.

In 1973, the Anglican Church Women and the United Church Women joined forces to become the All Saints’ Guild, and over the years they have maintained and cared for this vintage church and its grounds, which are graced by a heritage cemetery. In 1981, Reverend John Stainer presided over All Saints’ 50th Anniversary celebration.

The Guild invited Regional Dean, Derrick Smith, to lead the celebration of its 80th birthday on October 2, 2011.

Regular worship services continue on the first, third, and fourth Sunday of the month at 9:00 a.m.